Before I write, I request all of you to read this post with an open mind, minus bias to the perspectives that have been in our minds for ages because of where we belong to, and the social perspective thereof.

Who is a terrorist? There is no International definition of the same, and that is so for a reason. In common parlance, a terrorist is said to be someone who causes terror at a mass level.  But then again, who defines this terror.

Bhagat Singh and other such people are called Freedom Fighters by us Indians; Extremists, yes, but freedom fighters none the less. Let’s look at what they were doing. To put it simply, they were causing terror in the minds of the British (which were a mass) and raging war against the government in force at that time. They were breaking the then laws of the land. The British called them terrorists. I guess they were, if we go by the definition we give for terrorists.

On the other hand, we have the sensitive area of Kashmir, the people there call themselves freedom fighters, fighting for the freedom of Kashmir from India. We call them militants or terrorists. Why? Are they not doing what they are, for freedom.

You may say that J&K conceded to be a part of India. But then similarly, did the Nawabs not initially concede to a contract with the British to hand over government to them?

How are our “freedom fighters” not terrorists, while theirs are? Or looking at it from the opposite end, how are their “terrorists” not freedom fighters but our’s are? Think over it. 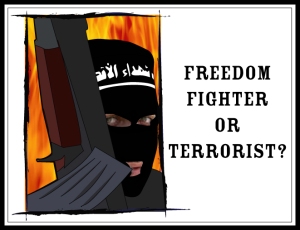 Another issue I would like to take up is the Nuremberg and such trials. Out of the people tried after the Second World War, was a woman, who was tried because she had told the then government of her husband who was acting against Hitler. Her argument was that she was following the law of the land, as it was at that time. How and why is that punishable? Also facing trial were some high officials of the government for imposing the rule made my Hitler. Their stand was that they only imposed what was the law in force, and had they not complied, they would have been given the death punishment. How is this fair to them?

Finally, I leave you all with one more question. If today a law is passed, that states something as mandatory, which is against the consciousnesses of you or I, with the punishment for disobedience being death, can you or I fight it? The best we can do, is appeal to the higher judiciary of the country to make the law ultra-vires (against) the Constitution, but if that is not done, would we not follow it? Think about this..

Writing is a hobby for me. It is my catharsis. View all posts by Janhvi

Your thoughts are as precious as mine... do share some Cancel reply

Before anything else, the credit for this blog goes to the people I have mentioned in my page inspirations.The credit for this new look goes entirely to Leo @ I Rhyme Without Reason. And the credit for making me initially change (way back) from my oldest theme to one more pleasent goes to Anu @ Virtuosity.

It would be great if you wish to join thoughtful thoughts by writing a guest post or contributing a topic. Drop me a comment at my 'ME' page/my post 'Bored of thinking' or the page 'Challenge Accepted' and I'll get back to you Asap.

Thoughtful Thoughts by Janhvi Pant is licensed under a Creative Commons Attribution-NonCommercial-NoDerivs 3.0 Unported License.
Based on a work at jojofeelings.wordpress.com.

All images on this site, unless otherwise stated, have been obtained via google search (leading to various sites)......
%d bloggers like this: